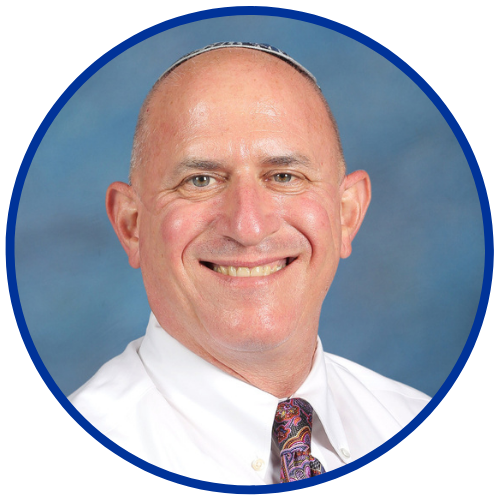 Tony Frank, Head of School, brings a strong background in Jewish education and administration to Rochelle Zell Jewish High School. Originally from the Chicago area, Mr. Frank made aliyah with his family when he was 14 years old. After serving in the Israeli army and earning a Bachelors degree from Hebrew University, Mr. Frank returned to the States to begin his career as an educator. He taught at Sager Solomon Schechter Middle School, then spent ten years as a member of the administrative team at Bernard Zell Anshe Emet Day School.

Mr. Frank holds a Masters of Science degree in Journalism from Northwestern University and a Masters of Arts degree in Educational Administration from Northeastern Illinois University. He completed the Senior Educators Program at Hebrew University’s Melton Center for Jewish Education in the Diaspora and has taught courses in adolescent development at the University of Illinois at Chicago while conducting research on Jewish identity development in adolescence.

Mr. Frank is a resident of Evanston where he lives with his wife, Rachel, and their children, Ella, Jonah and Daisy. 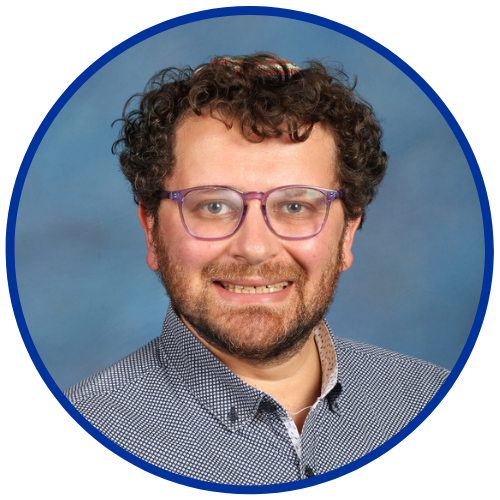 Rabbi Zachary Silver, Rav Beit Sefer, oversees Jewish life at the school, including tefillot, Shabbatonim, holiday programming, and Israel education. He teaches in the Jewish Studies department and serves on the administrative team to advance the mission of the school. He is passionate about giving students critical thinking skills and using Jewish texts to help students think about their place in the world.

Rabbi Silver received rabbinic ordination at the Jewish Theological Seminary, where he received a Masters in Modern Jewish Studies. He majored in Jewish Studies and History at the University of Pennsylvania, where he served as Sports Editor at the Daily Pennsylvanian and won the Presidents Award for Undergraduate Research for his thesis on the excommunication of Rabbi Mordecai Kaplan. He and his wife Tamara Frankel (a teacher in the Jewish Studies department) live in Lakeview. 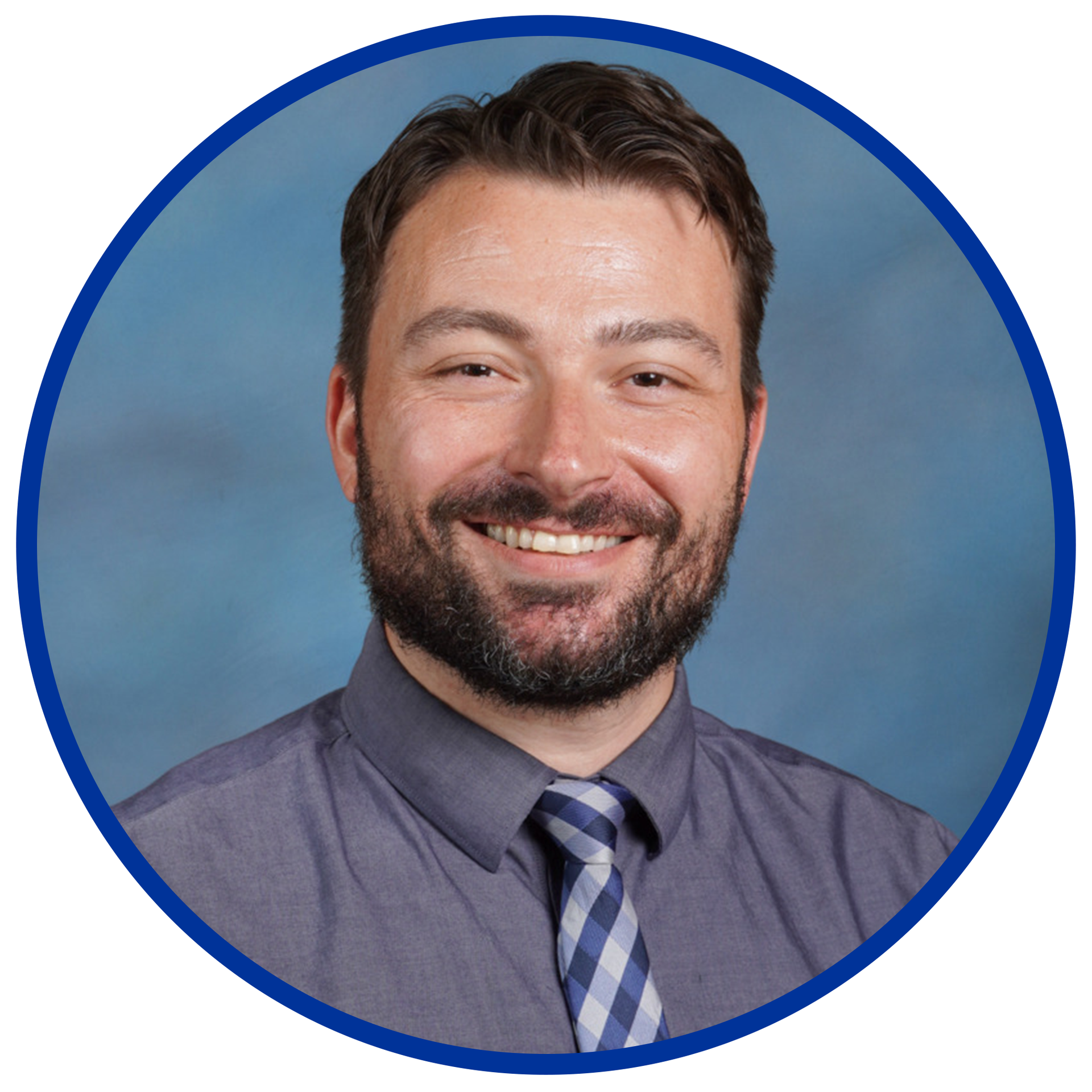 A proud native of Chicago’s Hyde Park neighborhood and a product of Jewish day-schools, Mr. Loeb graduated from Syracuse University with a degree in English and Textual Studies. Mr. Loeb worked as an editor and writer for a children’s book company in Chicago’s West Loop neighborhood before moving on to teaching and leadership roles with Perspectives Charter Schools, The Noble Network, and Kenwood Academy High School.

While serving Kenwood Academy as an AP English Language and Composition instructor, Data Team Coordinator, Course Team Lead Collaborative Facilitator, and Principal Intern, Mr. Loeb earned his Master of Education degree in Educational Leadership from DePaul University. He also earned his principal endorsement through the Illinois State Board of Education, and he is a PERA certified qualified teacher evaluator.

Mr. Loeb resides in Chicago’s Lincoln Park neighborhood with his wife, Samantha, and his son, Ezra. 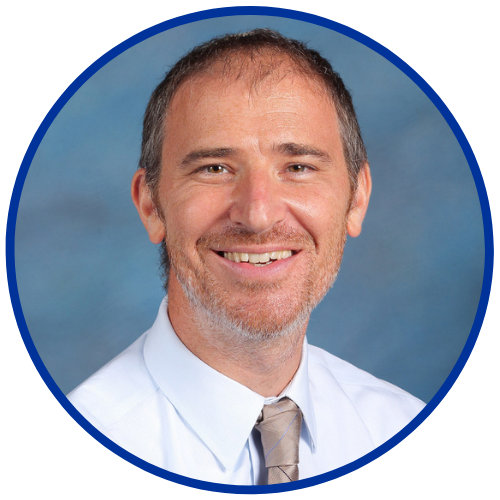 Stu Jacobs, Dean of Faculty. has a B.S. in organizational psychology from the University of Michigan, an M.A. in Jewish Education from Hebrew College—Shoolman Graduate School of Jewish Education and a certificate of Advanced Jewish Studies from Pardes Institute of Jewish Studies. He has taught Jewish Studies at de Toledo High School in West Hills, California, has served as an Israel Exchange Coordinator and has also had several positions at the Jewish Community High School of the Bay in San Francisco. 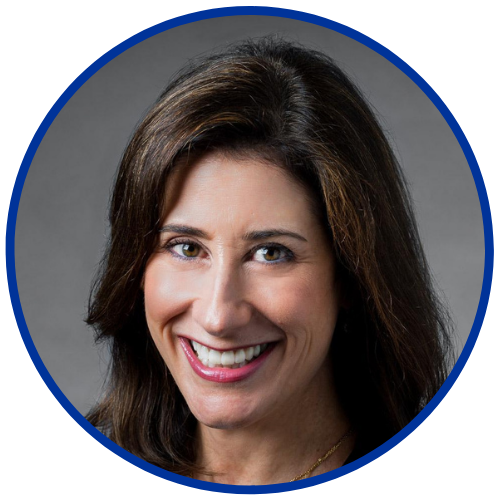 Stephanie Sanderman, Director of Development and Alumni Relations, has worked with a variety of Jewish organizations including JUF, ORT and AJC, overseeing significant annual campaign operations and working with a variety of professional and volunteer leaders locally and nationally over the last 20 years. Stephanie has a great deal of experience in leadership development, gift cultivation and event planning, and has led over 10 missions to Israel and other countries.

Most recently Stephanie has served as the Director of Development at the Cove School in Northbrook, working with parents, community members, young professionals and the Board of Trustees to raise over $6 million dollars in annual and capital funding. In addition to fundraising, Stephanie was responsible for events and community building efforts, including all Parent Association events. Finally, Stephanie and her team oversaw the communications and marketing efforts for the school and raised Cove’s social media profile significantly.

Stephanie lives in Highland Park with her husband and two step daughters. She is thrilled to be joining the RZJHS family and looks forward to coming “home” to the Jewish community. 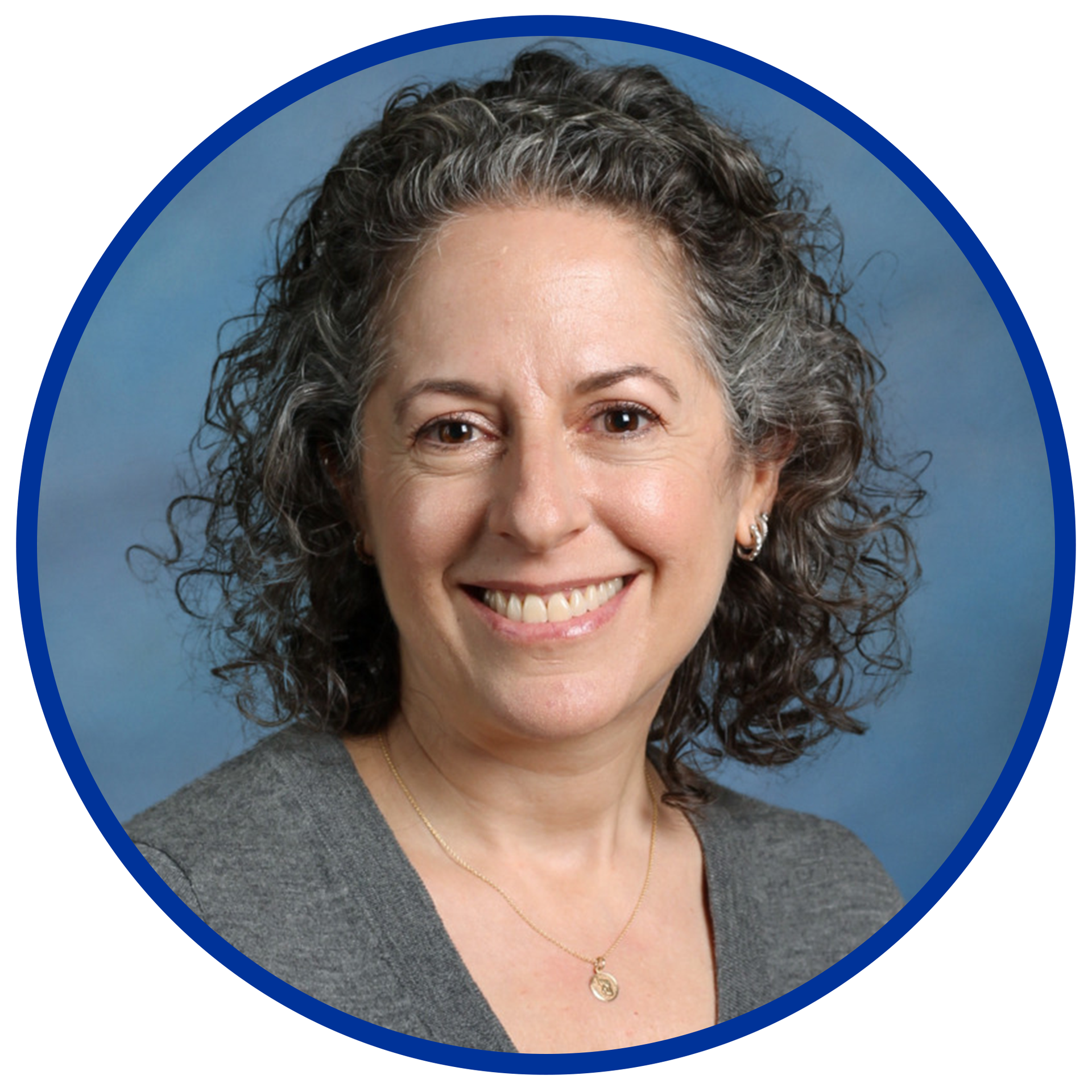 Riv Lynch, Director of Admissions, is responsible for recruiting and admitting students to the school in accordance with Rochelle Zell Jewish High School’s admission criteria, in consultation with the Head of School and Academic Dean.

Ms. Lynch was born in Israel and moved to the Chicagoland area as a child. She is an alumnus of Solomon Schechter Day School (SSDS) and is a proud parent of three Schechter alumni students. She is also a parent of three Rochelle Zell alumni students. She holds a Bachelor’s Degree in Psychology from Indiana University and a Master of Arts in Art Therapy from University of Illinois at Chicago.

Prior to joining the Rochelle Zell administrative team, Ms. Lynch ran her own professional organizing consulting business and was the Director of Operations at a local Financial Advising firm. Ms. Lynch is a resident of Highland Park where she lives with her husband, James, and their children, Hannah ('15), Liam ('18), and Uma ('21). 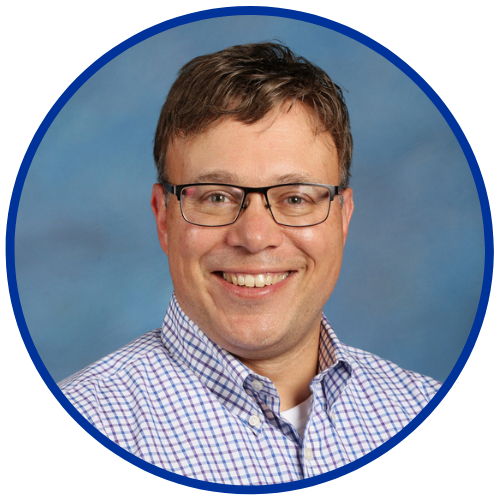 Jim Baumstark, Director of Finance and Business Operations, is stepping into a new administrative role at RZJHS after serving eight years on the RZJHS faculty as Math Department Co-Chair, teaching AP Statistics/Advanced Topics, Intro to Calculus, and AP Microeconomics while also volunteering as the RZJHS math team oralist coach and the DECA team faculty adviser.

Prior to teaching at RZJHS, Mr. Baumstark worked for over 20 years in “Corporate America” in various capacities including finance, accounting, corporate risk management, investment management, and employee benefits consulting as an actuary. He is eager to leverage this business experience combined with eight years as an educator to help shape the future of our school.

Mr. Baumstark holds degrees from Brown University (A.B.), University of Chicago (M.B.A.), and National Louis University (Teaching Certification). He is a Fellow of the Society of Actuaries (FSA) and a Chartered Financial Analyst (CFA). 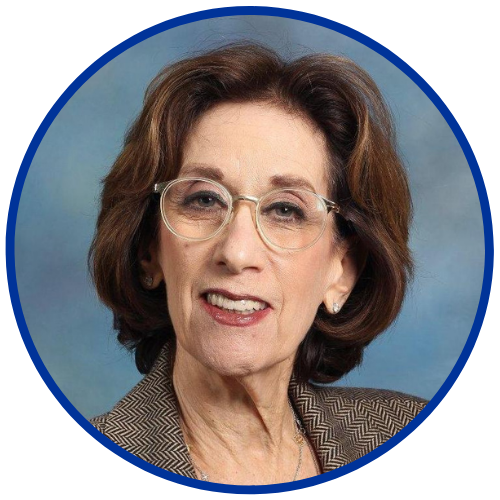 Inez Drazin, Director of Building and Administrative Services, is a member of the school's pioneer faculty and has served at RZJHS since the very beginning, when its doors first opened in 2001 in Morton Grove, IL.

Ms. Drazin is responsible for coordinating transportation, front office and maintenance duties and building services including food service, special events and school grounds. She lives in Northbrook with her husband Jerry and has three children and 6 grandchildren. 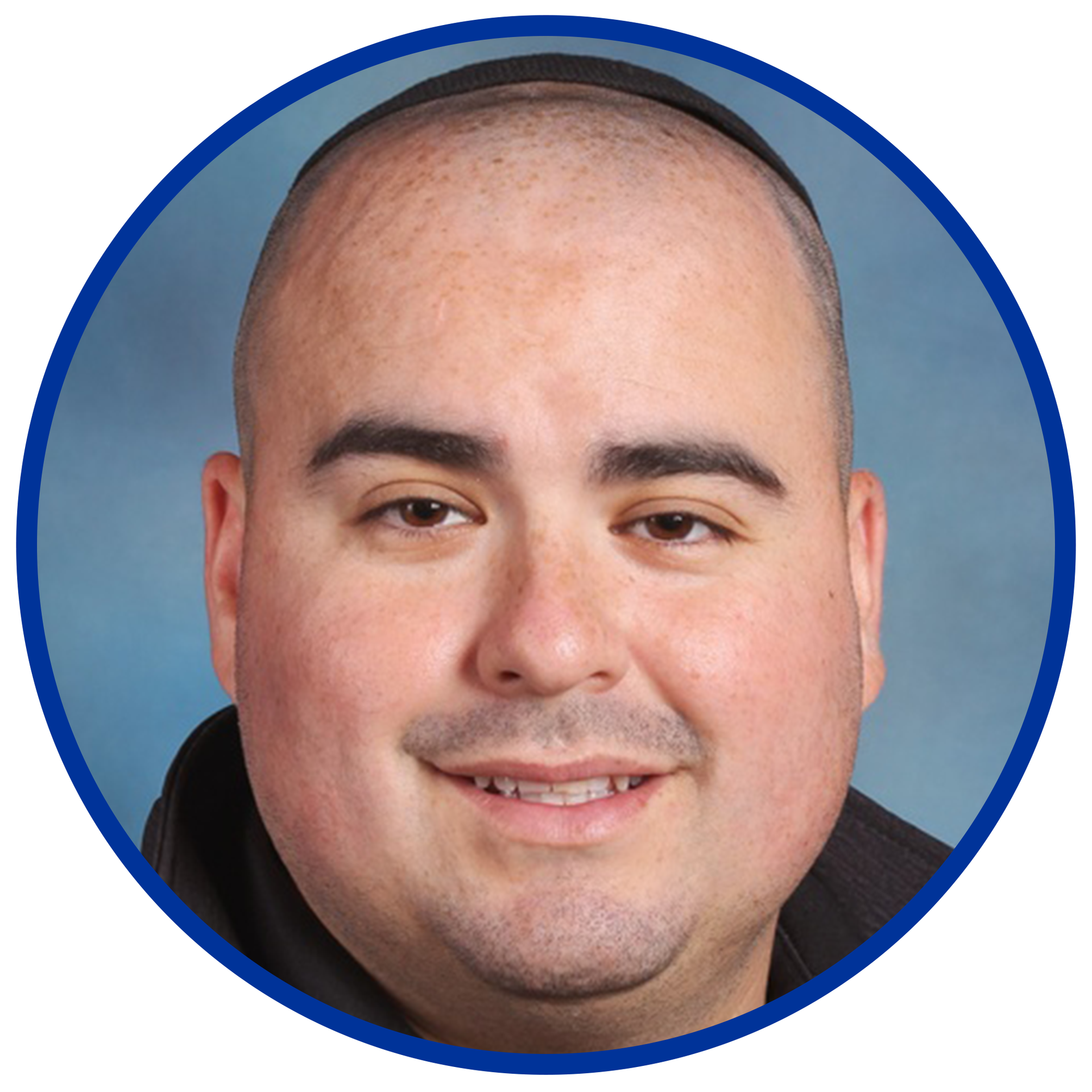 Coach Martinez graduated from North Park University in 2013 with a Bachelor of Science in Physical Education and Coaching, and an endorsement in Health Education. He was hired in March of 2014 to coach the girls' varsity soccer team. In April of 2014, Coach Martinez became the acting athletic director and has held the position of athletic director since July 2015. He also took over the head coaching duties for the boys' varsity soccer team in the fall of 2017. That same year, he completed his Master's in Coaching and Athletics Administration from Concordia University Irvine.